We started AskDrCallahan out of desperation!

We entered the world of homeschooling when our daughters Cassidy and Catrina were in 10th and 6th grade respectively. The leap from a private school system to schooling at home had lots of fears, but math was not one of them. I (Dale or Dr. Callahan) was serving as a professor of engineering and the University of Alabama at Birmingham, and Lea holds a masters in electrical engineering. Homeschooling high school math was the least of our problems.

But friends of ours felt differently. To them teaching high school math was a daunting task. Many of these friends asked if we would help teach math to their children as we taught it to ours. These parents recognized a lack of college level math prep and were looking for a better alternative. We agreed.

Have you ever agreed to anything not knowing what you are stepping into? In the first year we taught algebra II with trigonometry to a group of 9 kids. Things went pretty well overall.

The next year we were going to teach calculus to the same group of 9 kids, including of course our oldest Cassidy. But some families asked if we would also teach algebra II with trig again. We agreed – only then to be asked about geometry. By the third year, we were teaching algebra, geometry, algebra II with trig, calculus, biology, and physics in our basement! Something had to give.

We considered 3 options. 1) start a school, 2) quit altogether, or 3) create video content. I (Dale) was for quitting, but it was Lea who pushed us to go ahead and serve others by putting the content on video. So we decided to put our courses on DVD and thought we would offer them to our friends around Birmingham. We started with algebra II with trig. We recorded 8 DVDs of teaching and started a website to advertise them. People started buying. As they bought, we would burn and label the DVDs and ship them. It was just-in-time manufacturing.

Cassidy, then a college student in English, wanted to help. So we decided to tackle filming calculus. Cassidy helped to add some life to the videos. She did the direction and film editing and handled a massive amount of work in production and preparing for distribution. Now we had two products.

Then customers started asking us for a course in geometry based on Harold Jacobs textbook. We said no. Then we said no again. They kept asking and we kept saying no. Finally, we thought perhaps the customer was right! (Given the fact that my true area of expertise is engineering entrepreneurship, you would think I would know better to listen to what the customers demand!)

We did a massive search at all the geometry textbooks on the market – looking for the best. (We still have a stack of geometry textbooks from many vendors in our offices!) We discovered quickly that our customers knew what they were talking about. Jacobs had done an excellent job dealing with a subject many students love to hate. So we grabbed his book and developed a course and recorded geometry to DVD. Again Cassidy played an instrumental role in producing these products, and by now we had Catrina helping in production and shipping.

When Geometry was released – it became our biggest seller overnight. Lesson here, listen to your customers. Our just in time manufacturing began to fall apart. Catrina began to beg for a solution to the new chaos. We decided to invest in other tools to develop DVDs and speed up our ability to meet demand.

Since then we have also recorded algebra based on Harold Jacobs textbook. Harold then asked us to publish his improved Solutions Manual to Algebra – which we did. However, the person you see in the algebra DVD series is Cassidy. She had developed a LOVE for math (yes – even though she was an English major). Cassidy soon developed the skill to work with younger teens to teach math and in a more entertaining and interactive way that I could ever do. The algebra course was almost 100% Cassidy!

And by now Catrina (an artist) had developed serious skills as a graphic artist, and all of our product artwork became her design. (including the cover of my book about finding your passion and loving your work – Resumes are Worthless).

The Bigger Reason We Do High School Math for Homeschoolers

When I joined the engineering faculty at UAB in 2000 I began to more clearly see the demand for engineering skills in the market. The lack of engineering talent was becoming a major issue with industry and part of a national security crisis. I begin to learn that we had more demand for engineers than we had freshmen engineering students entering into engineering school (nationwide). But, of those that entered engineering, only about 25% survived. So we had a problem of massive market demand and no one to fill the jobs. (This problem still exists today!)

I began to research and realized this was a nationwide problem. Engineering schools simply could not keep up with the demand for engineers. We simply could not get enough kids into engineering school, and those that got in often flunked out, mostly due to lack of math preparation. So I decided to investigate by contacting my math faculty at the university and asking about the failure rate. I quickly found out that students entering our the university did rather poorly in math (as a group) unless they came from one of two public high schools in the area. Those students excelled.

What made these high schools excel at teaching math? I went to find out. What I learned was shocking. High school textbook publishers water down their material because most school systems demand they water it down to improve their pass rates. These high quality public schools (and most private school) refused to use the high school material and instead used standard college level textbooks in their teaching and their teaching style.

Since we had started homeschooling in 2000 also, I began to see a major conflict. Most homeschool material to teach math was barely up to the normal high school standards, much less what was needed for college prep. Sure, some students were doing fine, they were going to get it no matter what. But the bulk of homeschool graduates were poorly prepared for math and STEM (science, technology, engineering, and mathematics) careers. Research nationwide backed this up.

So we were driven to provide math courses that would leave a student more than prepared to excel at math, no matter where they went to college or what they studied.

The Reality of Our Company Today

Business is a funny thing. Who you think will buy from you is rarely who becomes your customer. While we do provide courses to some in our city and state, very few of our customers are in our home town. Instead, they are all over the world. Daily we work with students and parents worldwide helping them to be ready for whatever is thrown at them in the college classroom. 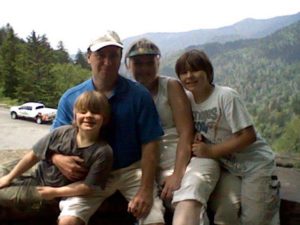 Support. The support we offer parents and students is one of the other things that really sets us apart as a homeschool math provider. When you go with us, you are not alone. Much of our math support come from Bradley Tune – an awesome student who went through our material and constantly was asking us questions. She came on board providing much of our support in 2015.

Social Media. Lea is usually the voice (text) you hear on our Facebook site. She actively talks to and guides moms to curriculum choices we make (even in products we do not carry) and she is always looking for ways to help.

Operations: Daniel and David – our two sons have started taking an active role lately in the company also providing much of our back end office operations.

Dale Callahan: As for me (Dr. Callahan) I am still on faculty with the University. Much of my role there is working with professionals who are looking to grow their career. Much of my work is helping those smart technology people find work they love. Some change jobs, some start companies, and almost all increase their income. But more important than income, most have found their way and now their work is something they love. My podcast (Company of One) and blog deals with helping people find their way – so I get to teach at the university what I talk about in my spare time.

I am also still looking for ways to help kids understand that math is a language. Through this language, we can see the natural world around us. But —- I have also begun to look at the bigger picture. My work teaching and leading people in corporate America has made me start to question the WHY of the whole path to college. We need to be looking at the long goal. We are all created with a purpose and our WORK is how we serve God. Yet, too many of us settle, heading to college not resulting in an education to broaden us and give us potential, but instead education that often puts us in a box. With over 50% of Americans hating their job (including Christians) we know something is broken.

So a great deal of my work has become helping people find their calling and helping them to take control of their careers. That starts NOW with your homeschoolers. College is not the end game, and college does not have to put them in a box. But to get a different result takes perspective that few consider. We get caught up in the degree and the resulting career field, and then we plan to get into college. Instead, we should all be looking for where we are called. We as parents often fall in the trap of trying to fit our kids into a box as defined by what we and they know about the current career fields and job descriptions.

So while you will see more about college planning from us in the future, also be expecting to see a lot about finding your calling! And, it is not JUST for kids!