Just when you think math isn’t relevant in the real world, you learn that it takes math to make coffee.

It takes machines to brew your coffee. Whether it’s a french press, a standard coffee brewer, or a pour over setup, when you make coffee,the manufacturer had to calculate the process using math so that it was repeatable. Why is it important to be repeatable? Well, when you sell a coffee maker, you want to be sure that it works the same way for every consumer that purchases that coffee maker. How do you do that? You use math. Algebra, to be exact.

“A fundamental goal for the manufacturers of coffee brewing machines and end users of their products is to be able to consistently brew the highest quality coffee possible…To achieve this goal, both a model relating the final composition of the brewed coffee to the process parameters, and a measure of the quality of the brewed coffee, are required.”

Wow. There are “process parameters” to making coffee! What we found out when we researched the making of coffee machines is that those parameters are calculated using concepts you guys are learning right now in 9th-12th grade math. Let me show you a few of them:

…Brew strength is defined as the ratio of the mass of dissolved coffee in the beverage to volume.

Percentages, extraction yield (which is a rational number)

Extraction yield is the percentage of dry coffee grind mass that has been extracted as solubles into the water. Brew strength and extraction yield are related by the brew ratio. Given that the most widely used measure of coffee quality considers coffee as a single component, it seems logical to model extraction based on a single coffee constituent.

Modelling (Modelling is a type of graphing on paper of information. You learn to graph at a basic level in Algebra 1, but you’ll be doing the kind of graphing they are talking about here in 10-11th grade.

Clearly modelling of the coffee concentration (brew strength) of the final beverage for a particular brewing apparatus, with the process parameters as inputs, could be a valuable tool in order to choose the optimal set of parameters to achieve a targeted coffee quality on the coffee “

You’ll notice words like “inputs” when they talk about making the coffee, as well as the phrase “optimal set of parameters.” Those are math terms you’ll see in your textbook as “variables.” For example, when you change x in Algebra, you get a different y (or “answer”). For coffee, the “x” values are different variations on size, amount, or time brewing that can impact the taste of the final cup of coffee. In this example, the taste of the coffee is your “y” value and the entire process is representing a function.

You can read the full report on the chemistry and physics of making coffee here in this awesome article by the Smithsonian Magazine.

I promised you Trig equations and Calculus equations were involved in making coffee as well, and we wouldn’t want to leave those out. Certainly if you’re studying calculus, you’re going to consider coffee your friend, so let me move on from Algebra to show you how taking derivatives and calculating the rate of change–which are calculus concepts–are related to making an exceptional cup of coffee:

In an extremely simplified explanation, coffee is made by combining coffee and water. You can understand that coffee has many attributes like size, roasting time, where it was grown, and the coarseness of the ground up beans when you make your cup of joe that all impact the taste. All of these factors that impact the taste are called variables.

Additionally, you have variables concerning the water like temperature and flow rate that need to be considered, and quantified, if you’re going to create a brewing process that’s reliable–and making a reliable brew process is key to any company that want’s their customers to know they can come back again and again for a great cup of coffee.

This is the math behind a general cup of coffee: 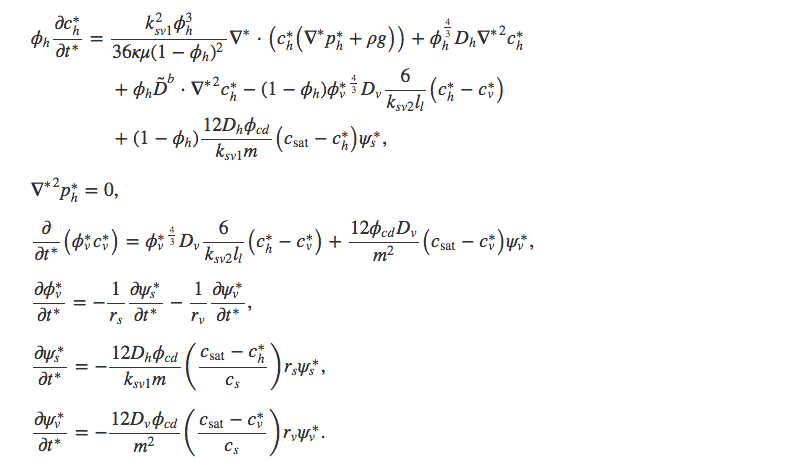 In a fixed volume of water, Kevin Moroney and his collegaues explain how coffee is brewed using differential equations:

mixing 60 g of coffee grind with 0.5 L of hot water and measuring the concentration of the extracted species as a function of time. In this situation the coffee extraction model can be simplified. Firstly it is assumed that the solution in the liquid outside the grains (h-phase) is well mixed, since only the average concentration is measured anyway. As a result, the solution in the h-phase has uniform concentration. This means that the spatial derivatives in the model disappear and we have the following system of ordinary differential equations:

The paper goes on to graph the results of these equations so it’s easier for coffee manufacters to know exactly how to calibrate and design the machines for optimal coffee brewing.

You can view all of Kevin’s conclusions here in their formal scientific paper on coffee brewing and extraction, but the point I want you to learn today is that brewing an exceptional cup of coffee again and again the way companies like Starbucks and Royal Cup are able to do (making us as consumers want to drink their coffee again and again), depends on understanding equations like phase change, exponents, differential equations, logarithms, and graphing. All of these concepts are taught to you in Algebra – Calculus 1 so that you are prepared to go forward and create businesses like great coffee companies.

And I don’t know about you, but to me, that’s some of the most important work on the planet because I wouldn’t be able to get anything done without my coffee!

Kevin Moroney and crew over at Springer “Coffee Extraction and Kinetics”