It’s all connected. Math helps us understand better the world around us, from art to medicine to science. Math explains so much of it. Math has even been called the language of the universe. In short, God uses math all through His creation.  Therefore, it’s no surprise that humans use math in all they create as well.

Art is used in our Algebra 1 Chapter 15  to show how the Golden Rectangle is used in famous artwork.  “The important relationship of mathematics to art cannot be understated when discussing Leonardo’s later work, and in numerous documents, letters and notes, the relevance of this is well documented. At times, he seems obsessed with these issues: while working on Mona Lisa for example, Leonardo is reported by Fra’ da Novellara to be concentrating intensely on geometry.”  – From this great article on Leonardo Da Vinci’s detailed math in his works of art as well as his scientific endeavors.

In Algebra 1 we learn how to manipulate numbers and use equations to find answers to real-life problems. Geometry takes those algebra skills and uses them to explain further how they can be used to draw, build, and even how math is abundant in nature. 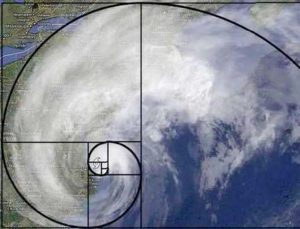 Check out this fun article and see from hurricanes to dolphins to galaxies, we experience this amazing, and fittingly named, Divine Ratio.  Once we move into Algebra 2, Trigonometry, and Calculus we really see more fully the math come alive in the world around us.  How cool is it that we have the opportunity to understand it? Isn’t it awesome?

Let’s do some math! and never forget the big picture we’re learning toward.